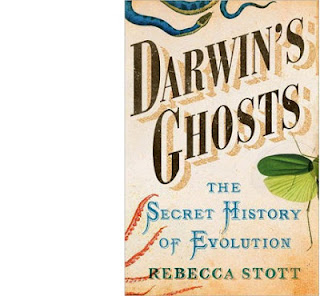 Darwin's Ghosts: The Secret History of Evolution, by Rebecca Stott ( Spiegel & Grau, 2012) is an appealingly written history of Charles Darwin's intellectual predecessors.  The secret of its appeal lies in Stott's cv.  She's a professor of literature and creative writing with two novels and a previous non-fiction work about Darwin to her credit.  Only a novelist could make you want to walk the 4th century BC beaches of Lesbos with Aristotle and his students; or make the scientific issues of 1790's Paris seem to rival in drama the political ones.  And only someone with a life-long fascination with Darwin and his times could piece out the important intellectual developments from the cluttered mosaic of mid-nineteenth century publishing.  If Stott has a fault it is in not insisting her readers note the driving curiosity of those on both sides of the evolution divide (or to use the early 1800's terms "species transformation" or "descent with modification" controversy).  These were people who deeply cared about and respected data.  Interpretation of that data is what they disagreed over.
Respecting facts as they did, the French and English naturalists of the period (most of whom were also clergy) were in accord with what was needed to decide the issue of whether species arose whole and then became extinct when God willed their demise, or whether they changed over time as their environment changed.  They needed a provable mechanism that would cause change--a reason.  Otherwise divine whim would seem as good an explanation for the fossil record as any other.
By the time Charles Darwin tallied up the numbers, the curiosity of over thirty men had contributed to the process of the scientific discovery of evolution.  And, this book shows clearly, it was a process as much as evolution itself was a process.  Beginning with the fascination of of Aristotle and al-jahiz with the seemingly infinite panorama of nature that caused them to ask what animals surrounded them, the inquiry took the form of when had all these species come to life, where they originated, and finally, why so many of them had ceased to exist.
Both Aristotle and the great Arab scholar al-jahiz were interested in cataloguing the rich living world around them.  The Greek didn't believe in a creator god, and the Arab had no doubt but that Allah brought the world into existence.  It was enough for both of them to organize the dazzling universe they saw into an understandable functioning system.  Even the great Leonardo da Vinci didn't concern himself with the question of species evolution, he was more interested in the fact that sea beds had over eons sometimes risen to become mountain peaks.  It wasn't until Benoit de Maillet, at the start of the eighteenth century that anyone set forward the idea of species mutation over long periods of time.  Denis Diderot in the mid 1700's, and a remarkable group of naturalists working during the upheaval surrounding the French Revolution, Lamarck, Cuvier, and Saint-Hilaire, brought evolutionary science to the very brink of acceptability.
As the European continent descended into war, A series of Englishmen, including Charles Darwin's grandfather Erasmus, brought into focus the essential question:  So, if God doesn't cause species change, what does?  Like their French colleagues they had to tread carefully.  Both the Catholic and Protestant churches thought divine causation was essential to their dogma.  And both sects were willing to destroy the career and livelihood of anyone that threatened that dogma.
Darwin, who had eleven children to raise, worked out a proof of species evolution by natural selection some twenty years before he published it.  His fear of the Church made him wait.  It wasn't till Alfred Russel Wallace put the pieces together in a flash of inspiration experienced while suffering from a high fever, and sent Darwin a letter asking him to comment, that Darwin rushed to publication.  That rush caused him to omit the introduction in which he had planned to credit the work of his predecessors.  That omission caused him to suffer not only the accusation of heresy, but that of plagiarising the work of others.  It wasn't till the third and fourth editions of his Origins that he put these "ghosts" to rest with a proper acknowledgement of their efforts.  Stott's book is engrossing, not only for its scientific story, but also for its lively description of the men who brought us the theory of species evolution, and the colorful times they worked in.
Note:  I downloaded this book from my local library's ebook catalogue provided by Overdrive, Inc.  If, by any chance, you want to purchase Darwin's Ghosts, be aware that the electronic edition has a number of formatting flaws, chief of which is poorly marked or lacking links between footnotes and chapter notes and the text.  Because of this, the print edition would be a better choice if you want to own a copy.
Posted by Brian at 10:26 AM No comments:

The Great Lover by Jill Dawson (Harper Collins e-books, 2010)
is the first of the ebooks I'll review in 2012.  Dawson's novel grew out of a life long fascination with biography.  That, and the fact that, as she admits, "I think I've always been a sucker for a sexy brilliant, impossible man."  The poet Rupert Brooke, who died early in WWI, is just that.  He's also insecure in his identity as a man, a writer, and a lover.  Living at the end of the Victorian era, and just before the expensive carnage of WWI changed the entire social and economic structure of the world, Brooke inhabited an unusual transitional period.  Members of the upper classes could indulge themselves in the leisure and cultural pursuits that were only a dream to the millions who physically labored to maintain them.  Those millions are represented in the book in the character of Nell Golightly, a poor bee keeper's daughter who is a maid in the house where Rupert has rooms.  She brings him his food, cleans his dirty linen, and despite her best intentions, becomes infatuated with him.  In many ways Nell's story is the strongest one of the book;  one certainly has more sympathy for her character than Brooke's.  While he fusses over an editor changing the title of a poem from "Lust" to "Libido," Nell berates herself for not being able to prevent her fifteen year old sister from becoming pregnant, and enduring a dangerous labor and delivery.  There couldn't be a stronger comparison made between the working class and the idle upper class of the Edwardian period.  Dawson is to be congratulated for showing the differences in a tale of love rather than class struggle.

I wholly approve of the approach Jill Dawson has to writing biographical fiction. "I think of it as applying fiction to facts like a poultice, to draw something out..." she writes, "My novels based on true stories probably evolved because of the decade of psychoanalysis, I underwent in my twenties, and my beginnings as a poet.  I wanted psychological truths, not representational social realism."  She does well with this approach, chronicling Rupert's 'she loves me...she loves me not' ditherings and Nell's straightforward assessment of her reality.  What others call "...drudgery is freedom to me," Nell concludes about her work.  ""My little room--the first bedroom I've not shared with five others;  the kindly way Mrs. Stevenson lets us eat the broken scones for breakfast, warm and crumbling with butter; the new-pin order of the kitchen...How could I give this up and go back to a life like Lily"s, never to see a soul all day besides Mrs. Gotobed and wailing little ones?"  My novel The Truth Of It:  Amelia Earhart's Private Journal, to be published in the next couple of months, employs the same philosophical approach to fictionalized biography--getting to the truth underneath the facts.

Stylisticly, Dawson's writing also reflects the search for psychological truths.  Nell is direct where Rupert is dreamy.  Both are detailed in what matters to them, the natural world and the description of the loved ones body.  Of Rupert, Nell writes, "It is only when he has left that I notice how vividly I remember his smell, the smell of him and how I have missed it.  It's a clean green river smell, the smell of warm flannel and Wrights Coal Tar Soap, and the smell of my childhood, my brothers playing in the river, or stripping bark to make a pipe:  something fresh mixing with something older, something male and a little sour, too."  Rupert describes Nell's "water-drenched body slim and green in the watery light like the shoot of a young tree, giving off her salty intimate river smell..."  Even though I don't know what Wrights Coal Tar Soap smells like, and can't quite imagine a salty intimate river smell, The Great Lover makes me wish to smell these things.  Isn't that the sign of good writing?
Posted by Brian at 11:59 AM No comments:

This new entry in the suspense/thriller genre has an entertaining twist that separates it from the run-of-the-mill hunt for a serial killer story. Child 44 (Grand Central Publishing, 2008) takes place in the Stalinist Russia of the 1950's, where it's hard to tell the difference between the murderer and his state paid pursuers. The author, Tom Rob Smith, has produced an engaging page-turner. But in today's publishing climate good writing doesn't guarantee publication. Smith's solution to the publishing industry's obsession with tried-and-true formulas, and its paradoxical insistence on exploring new territory at the same time, is to put his protagonist, MGB officer Leo Demidov, in an environment that is every bit as murderous as the killer is.


Leo's employer, the predecessor of the KGB, insists that communism has removed the social cancer that serial killers are a symptom of, i.e., serial murder doesn't exist in the Soviet Union. To suggest otherwise, by proving that a murder is one of many committed by the same killer for instance, is subversive in itself. Consequently, much of the suspense of the novel is generated by Demidov's attempt to investigate the killings without appearing to do so. Along the way we encounter some coincidences that would make Dickens blush. The strength of Smith's writing is such, however, that we don't really care.


I must confess I've long been a fan of the suspense thrillers featuring Nazi's, such as those written by Jack Higgins. German fascism contained enough unadulterated evil that one didn't have to spend any energy judging it; it was easy to concentrate on the plot and characterization. These novels were my way of escaping the pressures of real life.


As the destruction of Nazism faded in memory, though, the genre became dated. Attempts to replicate the same dynamics with Communist villains somehow fell flat (with the notable exception of John Le Carree). Tom Rob Smith has solved the problem, however, with his description of another totalitarian system whose evil logic requires it to consume its own in order to stay consistent. Smith can expect to receive the highest honor literary types can bestow: his solution will be copied.
Posted by Brian at 10:47 AM No comments: