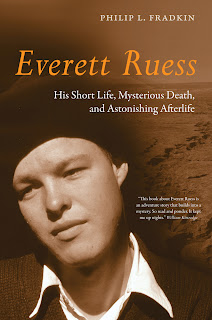 One of the sad truths I learned when writing about Amelia Earhart was that most people are more interested in her disappearance than her life.  The allure of vanishing without a trace attracts folks.  Especially when the disappearee is young, talented, and good looking.

Everett Ruess is one of those pretty, artistically gifted missing whose story pulls us to him.  The twenty year old rode alone into the Utah desert in 1934 accompanied by two donkeys packing his drawing supplies, food, and an ambition to find something in the wilderness that would sustain him throughout a lifetime of creating art.  His donkeys were found a couple months later, as well as various items he was known to be carrying  (though not all).  Also found were a couple of his signatures on desert rocks:  "NEMO 1934".  The allusion to Jules Vern's Captain Nemo captured Ruess's attraction to high culture and craving for isolation from a society that seemed to puzzle him.

Phillip Fradkin's Everett Ruess: His Short Life, Mysterious Death, and Astonishing Afterlife documents Ruess's "short life" and "mysterious death" well and in an engrossing manner, often through Everett Ruess's own words.  However, Fradkin's account of Ruess's "astonishing Afterlife" leaves me unsatisfied.  Something about this boy still draws us to him, but it's hard to put a finger on just what.

A University of Utah art curator has classified him as a "gifted amateur." A little Googling led me to the conclusion that prints by this "gifted amateur" go for about a thousand, when they can be found. I have some work by other similarly gifted artists that might bring five bucks on a good day.  For some reason, Ruess is different.  The Ruess family were prolific writers.  Everertt produced a high volume of writing while sitting around the campfire, and his mother and father kept the letters, later publishing some of them.  Everett was sometimes a powerful writer, and was clearly working to develop his writing further.  He was, in my opinion, more talented as a writer than painter.  His writing is, however, limited to describing a desert he preferred to paint.  No one argues his writing stands alone.  Studio photos by the then well known photographer Dorothea Lange were widely published during the searches for Ruess, and they show what most would call a very good looking young man, even if one suspects his beauty is primarily his youth.  All things being equal though, do we care more about the fate of the beautiful than the ugly?  Maybe.  But, for eighty years?


Twenty year olds-pretty and plain-drop out of sight everyday.  They run away, get killed, change their names, get lost in the desert, are swallowed by bodies of water, and sometimes just vanish.  What is it about Everett Ruess that makes anyone pay any more attention to him then anybody else?  And, they do pay attention.  In 2009 a journalist and two university scientists published what turned out to be an erroneous DNA identification of bones found in the dessert as those of Ruess.  When the ID proved wrong they ran into a blizzard of criticism.  A project that one of the experts thought would be "interesting and fun," but not of much consequence, came close to ending careers.

Perhaps it is Ruess's fascination with the beauty he discovered in the desert that keeps us interested in him.  In fact beauty was something of an obsession for him.  An obsession taught him by a mother who seemed more interested in art than family.  Stella Ruess seems to have been a very attentive mother, but she was attentive in the manner of a sculptor molding bronze.  Art was all in the Ruess household.  Since father Christopher was absent for many of the formative years of his children's lives, Stella's view was not to be tempered by his more practical bent.


Most of what we know about Ruess comes from the promotion and publishing efforts of his mother after his disappearance.  She kept his name and work alive for decades after she must have known he was dead.  At some point Everett became an art project, not a missing boy.  The same held true for Amelia Earhart.  Her husband George had no problem with publishing her unfinished book and his own biography after her death.  I've no problem with that.  She left a stack of unpaid bills.  But, he then backed a movie that suggested her last flight was connected to a US intelligence mission against the Japanese, a scenario many today believe true simply because of that movie.  I'm sure had she popped up again after the movie release she would have been furious at the lie.


Unfortunately, this is the way we make money in the age of celebrity.
Posted by Brian at 12:21 PM 1 comment: