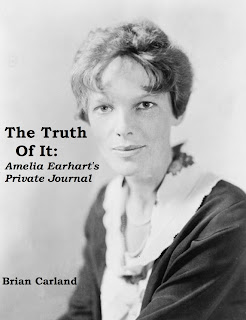 After all these years, and all those books, mystery still surrounds the person of Amelia Earhart.  Who was this woman who dared so much so often?  What drove her to take such risks, to give up so much of herself to flying?  That the questions are still asked tells us something about her desire to keep a part of her life away from the public's view.  She wasn't so much shy as reserved.  As time went by she realized both the rewards and drawbacks of a very public life.  The rewards were obvious.  She was a top earner on the lecture circuit.  Her books sold well.  She met and befriended some of the most interesting personalities of the period, everyone from Will Rogers to Eleanor Roosevelt.  The drawbacks were less obvious, but burdensome.  The type of record setting flying she did was very expensive, and as she made longer and more difficult flights the costs ate up her speaking income quickly.  She was one of the most recognizable women in America, so there was no such thing as feeling alone in a crowd.  And the crowds!  She truly hated and feared the mobs of people who wanted to touch her, even snatch at a scarf or hat as she moved through them at the end of a flight.  But what she did was by its nature public; the animalistic mindlessness of the throngs who pressed around her was unavoidable.


That reserve, born of an awareness she was always being watched by people she didn't know, but who knew her, has left its own questions.  In 1992, researching what became The Truth Of It: Amelia Earhart's Private Journal I was privileged to speak to a number of women who were active in aviation at the same time as Amelia.  Even after forty-five years some of them were still bitter that she had been privileged to accomplish what they hadn't.  They attributed her success to her upper middle class background and posh social connections.  A couple of them told me she was "known" to be promiscuous.  The facts just don't support any of that.  Her dad was a talented lawyer who couldn't make a living because of his alcoholism.  She was raised by grandparents in Atchison, Kansas, hardly a social Mecca.


Probably the promiscuousness is an after-the-fact result of publication of her famous letter to George Putnam, given him on the morning of their wedding.  She had grave doubts about the viability of mixing married life with an aviation career, and announced she might need to establish a separate residence where she could sometimes go to be alone.  She also told him she wouldn't hold him to any "medieval code of faithfulness to me, nor shall I consider myself bound to you similarly."  She demanded the right to end the marriage in a year if she wasn't happy.  You have to realize Amelia was raised in what we nowadays call a "dysfunctional" family.  Her experience of marriage wasn't a joyful one.  The biggest objection to the "promiscuous" Amelia, however, is the fact that she was watched wherever she went, and knew it.  Numerous biographers have been unable to turn up any evidence of extramarital affairs in her life.  And they've looked.  Lacking evidence, I have to agree with them.  The Amelia you read about in history is probably the Amelia that was.
This novel available at #AmazonKindle .
Posted by Brian at 9:30 AM No comments: