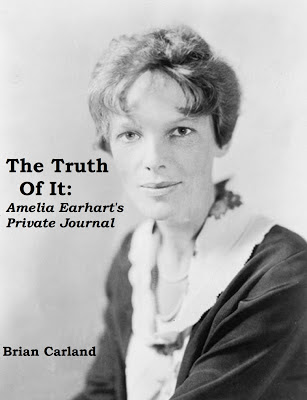 How do you write about someone like Amelia Earhart?  She led a life like few have before or since.  She was at once a very public and a very private person.  This has given us a somewhat uneven picture of her.  We have minute by minute accounts of Amelia's record flights, but have only a general idea of the details of her domestic existence.  I took my lead from a statement by her husband, George Putnam.  In his autobiography, Wide Margins, he wrote:   "There is, perhaps, another story to be written, if one could catch the spirit of the Amelia Earhart that was, and in a book that should be a novel tell a grand true tale of a modern American pioneer who was a woman."


Putnam's statement suggested to me that Earhart's story was really too big to be presented as straight biography.  A faithful biography would have given facts precedence over the spirit of adventure that enlivened Amelia.  It also hinted how she saw herself.  First, a pioneer of the air, but also a woman living in what was still a man's world.  And challenging that world.  Only the fictional method could catch the grand purpose driven life that set all those records, and upset all those men.


The first person journal seemed obvious to me.  Amelia Earhart's story was inconceivable unless she told it in a voice that was believable.  Finding that voice was the trick.  Luckily, I'd always felt drawn to Amelia, to her independent, self-sufficient, but playful approach to life.  And she left a clear record of that approach in her own published books, 20 hrs. 40 min.:  Our Flight In The Friendship, and The Fun Of It. Reading them, and some of her private letters, gave me a feeling for how she expressed herself.  When I sat down to write it seemed to flow, an indication to the writer that he's found the right voice.


Of course, there are hazards in the first person voice.  Some may find the voice differs from what they expect.  Others, after a few thousand words, may begin to tire of it.  The only solution for these problems is a story that provides excitement on every page, with unexpected twists and turns.  If you don't like my Amelia I apologize and wish you better luck on your next read.  I won't apologize for the excitement or the twists and turns.  They're hers.
Posted by Brian at 8:57 PM