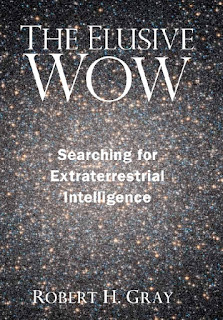 Anyone interested in the possibility of intelligent life on other worlds would do well to read Robert Gray's well written The Elusive Wow: Searching for Extraterrestrial Intelligence (Palmer Square Press, 2012).  This intriguing explanation of the use of radio astronomy to look for life outside our solar system begins with the 1977 discovery of a strong non-natural signal with an antenna operated by Ohio State University.  This is called the "Wow!" because that's the comment written in the margin of the printout of the signal by astronomer Jerry Ehman.  Gray patiently explains the system used to find this signal, the reasons it could not have been natural, and describes the puzzlement of scientists when the brief burst of radio power wasn't repeated.  He then proceeds to carefully describe the history of SETI (Search for ExTraterrestrial Intelligence) from that moment up until his book went to press in 2011.  The effort is now expanding to frequencies other than radio, and scientists are widening their net to catch signals more subtle than the  powerful  radio pulses encountered in the Wow! incident.  Although Robert Gray is an engineer by training, he is an amateur astronomer with competence and knowledge impressive enough to cause the managers of the world's largest radio telescope, the Very Large Array in New Mexico, to extend him blocks of time to search for radio signals from extrasolar civilizations--twice.  This volume also contains a valuable bibliography of books and articles, plus an extensive list of links to web sites dealing with the subject.

This is a good book to start with if you are becoming interested in SETI.  If you are, you'd be in good company.  One fact that surprised me in Gray's book was that some really heavy hitters, including Microsoft co-founder Paul Allen and and former Microsoft Chief Technology Officer Nathan Myhrvold have donated millions to looking for ET.  The little green men should guard their browser secrets well--free enterprise is on the way.