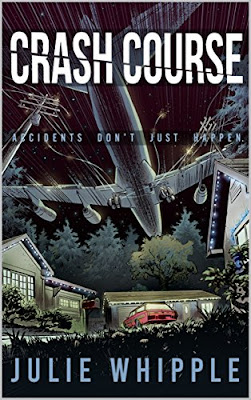 When I came across Julie Whipple's Crash Course in the new book section of my local library it struck me with a double impact.  First, I'm a retired air traffic controller, so this type of book reels me in as surely as a Siren's song.  Second, a headline pictured on one of the first pages under a photo of the torn and crumpled cabin of a jetliner didn't really need boldface to get my attention:  Friday, December 29, 1978;  United DC-8 Crashes at E. Burnside, 157th; 10 Killed, 175 Survive.  For the last eight-and-a-half years I've lived four blocks from that location.  I had no idea.  Conversations with neighbors, many of whom lived in the neighborhood for over forty years had never veered off into reminisces over what must have been an overwhelming and terrifying experience.  (Believe me, as a controller in Vietnam I witnessed large aircraft crashing a few hundred feet from me.  It is terrifying and overwhelming.  You never forget the sound.  You never forget the bodies lined up neatly to the side--it's real.)

Whipple, a journalist with extensive reportorial experience, is well equipped to write this type of investigative book.  She has the added advantage of being the daughter of Stewart M. Whipple, an attorney who represented Elizabeth Andor, a three year old child who survived the crash with extensive life-changing injuries, and also lost her parents and two sisters.  The elder Whipple provided his daughter with seven boxes of notes from the trials that resulted.

The first four of the standard five W's of reporting, Who, What, When, and Where, are easily presented in this type of book.  The last W, Why, is the hard one.  It turns the book into something that shares features with the True Crime genre.  This is introduced on the cover with the subtitle:  Accidents Don't Just Happen.  Not in the United States anyway.  Federal Law dictates that all aspects of aviation be accident free.  Properly designed, properly maintained and operated, aircraft will not crash.  That's the law passed to reassure commercial aviation passengers that they are perfectly safe.  So, if an airliner crashes, it is because someone didn't do his job right.  In American aviation there are no accidents.

United Flight 173 crashed on a cold winter evening in 1978 because somebody messed up.  The question is: who?  United Airlines, the Federal Aviation Administration, and the National Transportation Safety Board had no doubts.  Captain Malburn McBroom was the pilot in command that night and had total responsibility for the safe operation of the huge airliner.  He crash landed the big jet some 12 airmiles from the airport when the fuel tanks ran dry.  A pilot's first responsibility is to make sure he has enough fuel to land his flight at the intended destination.  McBroom didn't do that and it was his fault.  End of investigation.

Others, including the family of little Elizabeth Andor, weren't so sure.  McBroom had aborted his approach to Portland International that night when he put down his main gear and, instead of the reassuring "thunk" of the gear locking in place, was jolted by two shocks from the right main gear, intense enough to throw the massive plane from side to side.  He had good reason to believe the first shock was caused by a part failing in the piston that extended and retracted the heavy gear assembly.  But what was the second?  He suspected that the gear, unrestrained by the normal resistance of the hydraulic system, had free-fallen past the structural stops that kept it aligned properly for landing.  That might mean that the gear on the right side could be splayed, which would cause the aircraft to spin uncontrollably to the right on landing.  McBroom had opted to enter a holding pattern south of the airport while he and the flight crew "worked" the problem with the assistance of United Airline maintenance personnel on radiotelephone from San Francisco.  While working the problem the crew became distracted from monitoring the fuel situation and by the time their attention was brought back the plane lacked fuel to make it to PDX.

To United and the regulatory authorities that was the whole story.  But, wait a minute.  What if the part hadn't failed in the first place?  Then the approach would have continued normally and all 185 on board would have landed on time in Portland and proceeded with their plans for celebrating the new year.  And what if the part failure was not a unique event, but something well know to be a problem with the DC-8?  And what if that specific DC-8 was known to have a defective part and United had knowingly chosen to defer replacing that part, not once, but twice?  What then?

Whipple's well written book journals the story of those what-ifs.  It presents a landmark lawsuit and the human lives forever changed by an avoidable accident.