The Impeachers: Racism Then and Now 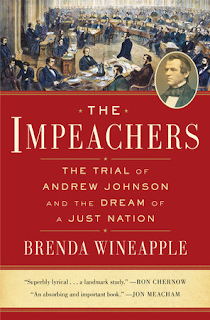 I suppose most will pick up The Impeachers out of curiosity about the precedent of presidential impeachment considering all the talk of impeaching President Trump (this being 2019).  Although anyone who reads The Impeachers through will certainly be given a lot to chew on in this regard (especially concerning the similarities of personality of Donald Trump and Andrew Johnson), this book is really about something broader than the post-Civil War Catfight in the Capitol.

The history I was taught in high school in the 1960's, uncontradicted by introductory college history and political science, was that the Impeachment of Andrew Johnson was about whether a president could dismiss a cabinet officer (in this case Edwin Stanton, Secretary of War) who had been confirmed by the Senate.  The Senate failed to convict.  Johnson remained president.  Stanton resigned.  End of story.

O my, what they left out!

It's hard to describe the hate and violence that seized the southern states after the end of the war.  Massacres killed hundreds of black citizens (they were now citizens, although without the vote, yet) in Memphis and New Orleans.  Rivers of what we would now call hate speech flowed from southern politicians, uncowed by defeat on the battlefield.  The Ku Klux Klan intimidated and murdered not only blacks but white Republicans who advocated for them.  In some areas (Texas) Union officers couldn't walk the streets without armed guards.

Congress, dominated by Radical Republicans, passed reconstruction act after reconstruction act, all vetoed by President Johnson, then passed over his veto.  Johnson appointed military commanders and governors in the south who were favorable to the most lenient terms for the readmission of southern states to the Union.  He pardoned any and all of the former Confederates and ratified their state constitutions just as they were before the war.  He told anyone who asked, and quite a few that didn't,  that ours was a "white man's government."  Stanton tried to mitigate the impact of Johnson's actions.  Johnson mightily wanted Stanton out of his way so he could totally bring the south under his control, readmit those states who had rebelled, and bring southern congressmen back to DC to support him and insure that blacks never would have any influence in politics beyond being counted for congressional districting.  The Congress affirmed that Stanton, appointed by the assassinated president Lincoln, could not be fired by Johnson.  Johnson fired Stanton, anyway.  Stanton locked himself in his office, surrounded the War Department building with troops and refused to turn over the keys.  Impeachment ensued.  A long, mostly boring trial took place, with plenty of intrigue on all sides.  Andrew Johnson was acquitted by one vote.

It was hardly over, though.  Johnson spent his remaining months in office insisting he was right, appointing racists, and issuing general amnesties to the former Confederates.  Congress continued trying to reign him in.  When U.S. Grant came to office in 1869 he faced mighty hurdles trying to establish some sort of justice in the reconstruction of the south.  What he and the Republicans managed to accomplish in the 1870's was a weakened version of what might have been done in the 1865-69 period, had not Andrew Johnson, accidental president and full-blooded racist, been president.

It's no coincidence that this book is being published as impeachment talk ramps up.  Sadly, it's no co-incidence that race hatred buried deep in this country's history and heart still dominates the back story.