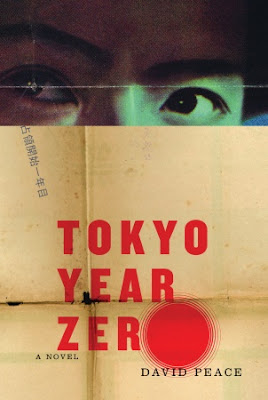 David Peace's detective novel set in a defeated Japan in 1945, Tokyo Year Zero (Alfred A. Knopf, 355 pages, 2007), first came to my attention, appropriately enough, through the radio. I heard a NPR reviewer talk about the emotional impact of the author's use of Japanese language words that sound like the action they describe. For instance, gari-gari represented the sound of scratching. Ton-ton is the tap of a hammer.


In a nation that lacked dependable clean water and soap, and had been leveled by American incendiary bombing, there was lots of scratching and hammering. Peace is able to create a virtual background soundtrack for his book by the continuous use of these onomatopoeic words. He also, by monotonous repetition, gives the reader a sense of the desperate drudgery of life at the subsistence level.


Few writers would be able to find the delicate point of balance between perfect depiction and tedium. Peace, luckily, is able to bring it off, and in the process creates a vivid backdrop for his compelling story of a detective's hunt for a serial killer. Tokyo Year Zero is more than just that, though. As the main narrator, the bitter and angry Detective Minami, continually suggests, no one is who they say they are and nothing is what it seems. There is a growing certainty that the killings are linked to other crimes, perhaps crimes involving the police themselves. The author selectively lets us listen to Minami's thoughts, which are almost as repetitive and monotonous as the sounds of scratching and hammering in the background. They are also mean and ungracious, unlike the polite Japanese ritual that Minami curses even as he graciously performs it.


Peace has given us a novel that works on three levels. It provides the narrative readers expect from fiction, complete with characterization and plot; it creates a virtual audio accompaniment for the book; and it gives us a glimpse of the inner mental workings of the key character. The result is important, because it provides entertainment which ought, given an intelligent and imaginative reader, to compete with video. The unintelligent and unimaginative will continue to prefer the passive video experience, and being the vast majority of the population the film industry needn't fear losing much of its audience. But for those of us who prefer to use the screen in our own minds, books like Tokyo Year Zero may be the novels of the future.
Posted by Brian at 6:20 PM